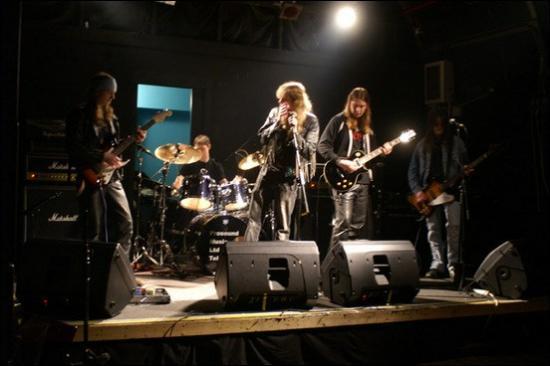 It is the way of musical talent across the globe that most people who are successful need to move on to find success. The guys in Estrella whose roots are deep in Caithness have moved with success pulling them away. Now located in Aberdeen they have busy schedule of gigs and are increasingly asked to play around the country.

Friends and fans can stay in touch with the band through their new web site Estrella Rocks that looks the part with sections filling up and coming soon a place for music downloads - a must now for any band that is serious about getting the music out to the fans and the preferred route for quite few recent chart successes.

Keeping up their usual fast pace the guys are releasing an EP on 27 April and all being well it will be in local music shops. Caithness seems to have become a musical factory in recent years with many new bands appearing for a short while and then vanishing as the members head off for college or uni. Estrella has done the apprenticeship and made the leap towards making it a career. There are few breaks in the harsh world that is starting the climb towards a successful musical life that can pay the rent but Estrella are finally playing their way into the wider Scottish music scene.

Keep up with them over at Estrella Rocks

Highland Rock Band, ESTRELLA are set to play an acoustic gig on the WORLD'S shortest street on Friday 22 June.   The Guinness Book of World Records declared Wick's Ebenezer Place (in the far North of Scotland) as the world's shortest street in 2006 and the band will play a 15 minute set outside its only address, No 1 Bistro, Mackay's Hotel but at 6ft 9 inches in length there is no room for another building in this street! Murray Lamont of Mackay's Hotel said "We are delighted that Estrella has chosen to play a gig outside one of the county's most historical landmarks.
[]
30/3/2012

Highland rock band, ESTRELLA, is destined to make big waves in the coming months with the release of their debut album - "Come Out To Play" - on 21 May 2012.   An exciting time for these full time musicians, who are set to play a handful of Scottish dates, before heading out on a full UK tour in May/June.
[]
13/5/2006

Belladrum Tartan Heart Festival has announced 'Pulse' - a talent trawl for emerging bands and soloists throughout the Highlands, in association with Mad Hatters at Hootannany's and HUBL, the web site for Highland musicians.   A series of selection events will be around the Highlands - Inverness, Dingwall, Nairn, Alness, Thurso, Skye and Oban, culminating in a final selection in Mad Hatter's, Inverness in July.