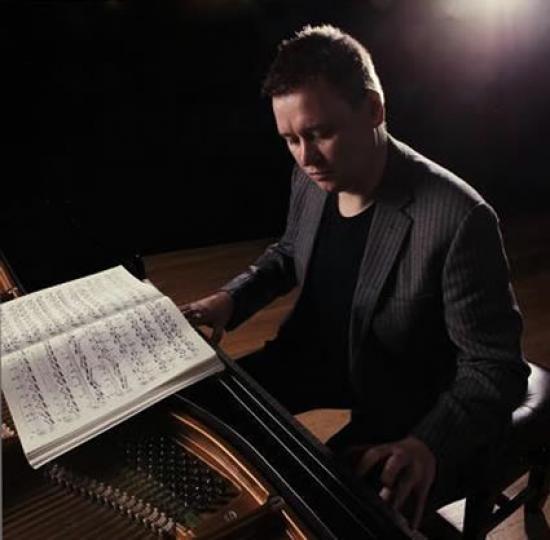 "set to be one of Scotland's most exciting young pianists"
(Philip Jenkins, Head of Keyboard, RSAMD, 2002)

Joseph Fleetwood comes from an extraordinary musical lineage, having studied extensively with a pupil of Karl Ulrich-Schnabel. Karl's teacher was Artur Schnabel, a pupil of Leschetiszky, who studied under Czerny. Czerny was a protégée of Ludwig van Beethoven. It is from this training that Joseph's concept of tone production and preparation has been developed, and his playing is attracting international critical acclaim.

He started playing piano at the age of 6, teaching himself to play by ear almost as soon as a keyboard became available to him, and gave his first recitals at the age of 11. Entering the Royal Scottish Academy of Music and Drama at the age of 18, Joseph went on to give performances of Rachmaninoff 2, Beethoven 1, Grieg Piano Concerto, Gershwin's Rhapsody in Blue and Tchaikovsky 1 in his student years.

Whilst at the RSAMD he developed his skills in the field of chamber music and Lieder, and won the RSAMD's coveted Lieder Prize when he was 19. During his post-graduate studies at the Royal College of Music in London, he was awarded first-class honours for his trio performances.

Since then he has launched a professional career with performances all over the UK and Europe. He has performed in Vienna, Frankfurt, Aschaffenburg, Wurzburg, Milan, Naples, and continues to build his international reputation. In Milan, it was noted that Joseph "....played with the precision of a fine-arts jeweller, elevating the art of playing the Chopin Revolutionary Etude to a higher plane".

Joseph is comfortable in many areas of the repertoire and his recitals regularly include works by Liszt, Debussy, Beethoven, Schubert, Ginastera, Janacek, Bartok, Prokofiev, Rachmaninoff, Shostakovich, Brahms and many others. Joseph's playing has been broadcast on BBC 2 Scotland, BBC 4 and BBC Radio Scotland as part of the 2010 Scottish Proms, and his CD of Grieg's piano music has been aired on many Scottish radio stations including BBC Scotland's "Classics Unwrapped" programme. In autumn 2013, Joseph will be recording his second solo CD in association with Clement Pianos Recording Studio and Bluthner.

"an outstanding young performer!" (Murray McLachlan, Chetham's)
"one of the best interpretations I have heard in many a long time." (Garry Fraser)
"plays with the musical maturity of a musician twice his age" (South London Press)