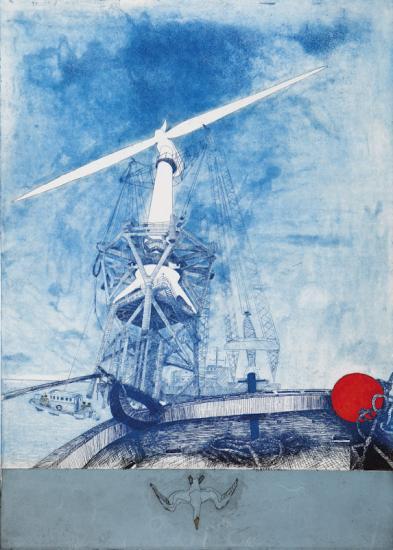 A new exhibition documents the construction and installation of the world’s first five megawatt offshore turbines near the Caithness coast.

Internationally acclaimed Sutherland artist Sue Jane Taylor, famed for her work with the offshore oil industry and Piper Alpha Memorial Sculpture, has turned her focus to renewable energy in her latest exhibition entitled Beatrice Works, which opens in Thurso on Saturday June 8th before travelling to Aberdeen, Kirkcaldy and Kirkwall.

The exhibition combines paintings, etchings, drawings and diaries to document the development of the groundbreaking Beatrice Windfarm Demonstration Project at the Beatrice Oil Fields off the east coast of Caithness, where, with the support of Talisman Energy (UK), Sue Jane was given access to capture the people and places at the cutting edge of the deep-water renewables industry.

From Denmark to Germany to Scotland’s Arnish, Methil and Nigg, the resulting work provides a valuable end to end insight into the experimental construction and installation of the world’s first five megawatt offshore turbines.

As with all Sue Jane’s art, Beatrice Works shows pioneering technology side by side with individual workers, and, as much as the exhibition explores the beauty of the turbines and the changing land and seascapes around them, it is about the many working people who make these incredible feats of engineering possible.

Sue Jane said: “I try to capture the spirit and feeling of the project and people along with its environmental implications.

“Artists make us look at things differently and I believe that the cultural community has an important part to play in the conversations that must be had about issues of such topical social and economic importance.

“I hope my work will provide a valuable insight into the people and technologies that have produced the North Sea’s first deep water renewable energy and give people new ways of thinking about the proposed Moray Firth wind farms.

“I am delighted to be opening this exhibition at Caithness Horizons Museum in Thurso which is located near the Beatrice site. Caithness is set in the heart of the renewables industry’s international test sites and its northern developments, and the exhibitions’ future locations – Aberdeen, Kirkcaldy and Kirkwall are also significant because of their links to the project.

The first leg of the exhibition, which shows at Caithness Horizons until August 24th, runs in parallel with an Education Programme that shows the links between art and engineering. It opens with a presentation entitled The Art of Engineering delivered by Alan Ogg, Assistant Director, Learning and Teaching and Department Head, Engineering Technology and the Built Environment at the Engineering Technology and Energy Centre (ETEC), North Highland College, University of the Highlands and Islands.

A series of activities sponsored by a range of local organisations will be held for Caithness school pupils' including art and engineering site visits, to inspire pupils to create their own art. An exhibition of the pupils' work will be shown in July.

Alan MacAskill, who conceived and developed the Beatrice Demonstrator turbines, is the visiting speaker in August.

Christine Gunn, Education and Community Officer at Caithness Horizons said: “Sue Jane aims to demonstrate that artists have a special role to play in these hi-tech projects. Her work is not just powerful and arresting; it is significant on a wider level because it documents human as well as engineering achievement, and the environmental issues that need to be addressed in developing the engineering of renewables.

“The education programme will give a context for cross-curricular learning, helping to break down perceived barriers between art and science.

“As the race gears up to try and satisfy the world’s thirst for energy, Caithness’s wind, wave and tidal resources are attractive to developers. We hope our education programme will inform, inspire and entertain while local plans evolve.”

Sue Jane's work is famous for linking the rugged, bleak beauty of the Highland landscape with the massive industrial structures involved in the lucrative and job-rich oil industry, and now the renewables industry.

She trained at Gray's School of Art in Aberdeen and the Slade School of Fine Art in London. During her Black Isle childhood she witnessed the effects of oil-related industrialisation first hand, and her association with offshore industries began in 1984 when she was one of 12 young artists commissioned by the Stirling Shipping Company to mark the 10th anniversary of its North Sea oil involvement.

From that time, she became fascinated by the offshore industry and by the people she met. Keen to capture a true sense of life at the frontline, she travelled on platform supply vessels and visited platforms including four days on Piper Alpha, before the 1988 explosion that claimed 167 lives.

She has worked across the UK, Europe, Australia and Tasmania.

With the blessing of the families, Sue Jane set up a memorial exhibition of Piper Alpha paintings and drawings that ran simultaneously in Scotland and London between 1989 and 1991, and her bronze memorial to the men of Piper Alpha was unveiled by the Queen Mother at Aberdeen’s Hazelhead Park in 1991.

She remains closely involved with the Piper Alpha Families and Survivors Association and her work will be featured this year in commemorative activities to mark the 25th anniversary of the disaster.

Find out more at www.suejanetaylor.co.uk

Our next exhibition at Caithness Horizons is called Graffito.  Breaking the boundaries of what is art and what gets shown in a gallery, Graffito is an exhibition that celebrates artwork that is available to everyone.
[Venues]
4/3/2018

Caithness artist Elaine Rapson-Grant has a display of her latest artwork coming soon at The Cafe Gallery, Caithness Horizons.   Admission is free but you could treat yourself to a cuppa and cake whilst you visit the exhibition.
[Venues]
8/10/2016 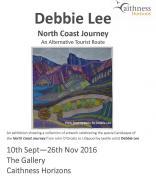 Debbie Lee An exhibition of textile art celebrating the special landscape along the north coast route from John Oâ€˜Groats to Ullapool â€˜Throughout Scotland there are sign posts to direct travellers, â€˜tourists', off the main route and onto an â€˜Alternative Tourist Route'.   The sign at John Oâ€™ Groats directing people to Ullapool using the north coast is both inspiring and to me amusing.
[Venues]
30/1/2016

Thursday 10 September, 12.45 -16.30 Caithness Horizons, Thurso (Please note that lunch is not provided, however you are welcome to have lunch at The Caithness Horizons Cafe prior to the event) Running a craft practice is addictive - there is always more to try, new ideas to explore and projects to develop.  Growing your business allows you to confidently pursue these exciting new opportunities to strengthen your profile, expand your range of customers and generate healthy profits.
[Venues]
13/8/2015

Tuesday 11th August saw local group No Limits Caithness visit the Museum for a morning packed with Viking activities with Curator Joanne Howdle, or Thordis EirÃ­ksdÃ³ttir as she is fondly known to local groups and schools.   The group helped the Museum to hit the half million visitors mark and to celebrate they were presented with a special cake made in the Museum's cafe.
[Venues]
1/6/2015